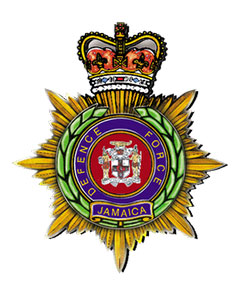 The ever evolving and increasing the ever security concerns that affects Jamaica overtime has led to a complete restructuring and rationalization of the Jamaica Defence Force (JDF) in an effort to optimise the use of resources.  This optimisation includes the creation of three (3) Geographic Commands that will conduct infantry operation in those specific areas covering the entire Island.

4 JR was designed with similar establishment to 1 JR and 2 JR as part of the overall optimisation plan.  On 27 October 2018, HQ JDF ratified the Unit`s formation and the proposal for the Unit to be assigned Central Command (CENTCOM), which includes St Ann, St Mary, Portland, Manchester and Clarendon.

Leading up to the Initial Operating Capability (IOC) of the Unit, a number of significant events and accomplishments paved the way for the Unit’s operationalisation.

The first posting to 4 JR was Warrant Officer Class Two (WO2) Courtney Williams who was appointed as Orderly Quartermaster Sergeant (ORQMS) on 18 September 2018.  Warrant Officer Class One (WO1) Michael Moulton was appointed the Regimental Sergeant Major (RSM) on 22 October 2018.  The first Commanding Officer was Lieutenant Colonel Murphy Pryce who was appointed on 7 November 2018.   The works of these few persons have set the conditions for what the Battalion has accomplished and will continue to accomplish.